The Compiled Thoughts of Harlan Guthrie 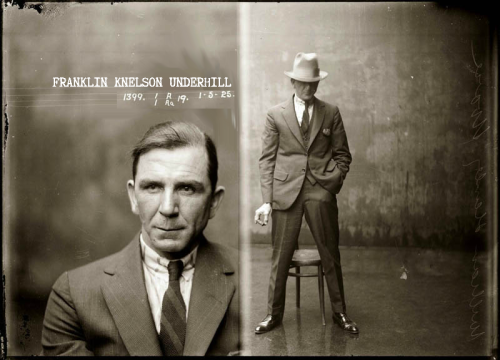 “Do you blame yourself?”

Frank Knelson Underhill stood up briskly from his place at the table pushing the chair across the hard wooden floor of their apartment as he did. The chair slid a few feet and with a hollow knock hit a warp in the wood and tumbled over. Frank’s hands were clenched in fists of rage, his knuckles white, as he stood staring through fierce eyes at his wife Ellen. Ellen stood opposite him with a crooked expression, almost a childish smile as if taunting him to come at her. Frank stood staring at her as sweat dripped from his brow onto the half eaten meal before him. Ellen’s childish gaze flashed to the bedroom for an instant and back to Frank’s with a sense of determination.

After a long pause Frank grunted; “I fucking dare you.” through gritted teeth.

Ellen’s expression changed to utter disgust and she walked towards the bedroom. Frank slowly walked to the toppled chair, dragged it across the floor back to his place at the dinner table and sat down to his now cold meal. For a moment Frank flashed back to his childhood, to the small house he grew up in just outside of Arkham. His parents would scream at each other from either side of the dinner table while he and his younger brother sat quietly eating their meals.

Ellen burst out of the room with suitcase packed and stood at the door expectantly. There was a long pause before Ellen cleared her throat. Frank sat looking down at his plate before him and after a beat he slowly pushed his chair back and stood up, his back still to her. He turned around to face her, her expression more pained, her eyes welling with tears and he began walking towards her. Frank thought about his parents, no matter how loud they got, no matter how much anger they would spew at each other – they were always loyal to one another, always.

Frank approached her standing at the door and as he did she set her bag down as if to embrace him. Frank reached out as her arms opened and touched the doorknob behind her. He took a large step back as if to clear the way and stood there waiting for her to leave. Ellen took in a shallow breath of air as if the wind had been knocked out of her and as tears began to flow from her face she picked up her bag and left. Frank shut the door and stood at it for a minute before returning to his plate.

That was the last time Frank ever saw Ellen.

Frank was dressed before the sunrise and sat anxiously expecting Ellen’s return the next morning. Around 12 o’clock there was a knock at the door and Frank was greeted by two uniformed policemen, behind them stood a man in a near black trench coat and a fedora, however he stood outside in the hall as the two officers entered shutting the door behind them. As they paced around the apartment the taller of the two men asked Frank to sit down. Frank sat anxiously as the two men shared a woeful look of regret between them. After a short breath the shorter one began speaking to him in a soft tone.

“Frank, your wife’s body was found this morning,” His tone was flat and to the point. Frank could feel the hot tears starting to form behind his eyes as he swallowed hard. After a second the officer looked back at the taller man who nodded, urging him to continue. Frank caught the exchange between them and the pit of his stomach dropped as he realized that there was more to the story. “…we also suspect that she was subject to crimes…..” he paused wiping the sweat off his forehead, he swallowed hard and continued, “…of a sexual nature.”

Frank stood up and walked to the window as tears began covering his cheeks. The sun was baking the street below, children danced around an open hydrant and pedestrians fanned themselves with large pieces of the Sunday Post. The officers slowly stood and turned towards the door and as they turned the knob Frank spun around, “Will you find him?” The shorter officer kept his back to Frank and left the apartment while the taller one turned to Frank and shook his head, “I don’t know, Frank.” They left Frank with nothing but his thoughts in a large empty apartment.

That was two weeks ago…