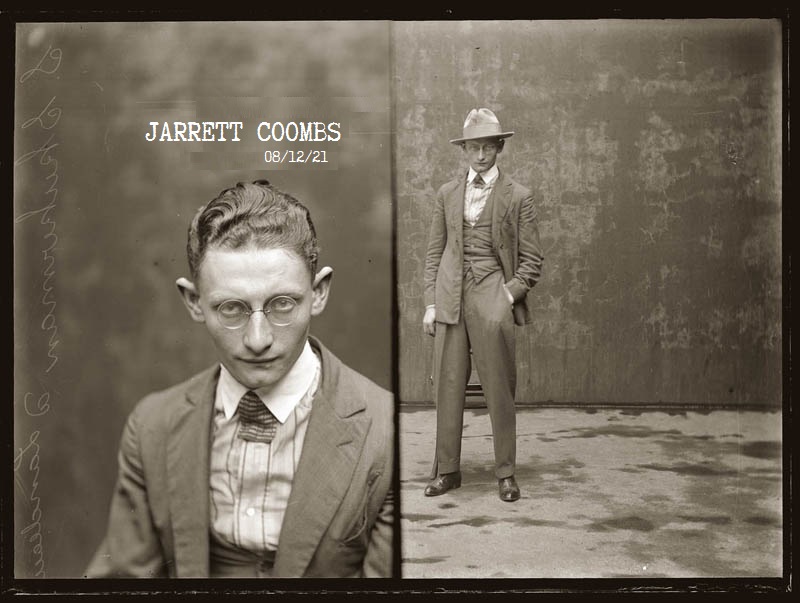 Jarrett Coombs entered the small damp hotel room, eager to begin this night’s work. He set his large tan leather suitcase down on the mattress and quickly made his way to the window. The summer heat wafted in as he opened the window stirring the stale air within the room. The room itself was plain and the once milky white wallpaper now sat a faded yellow, stained after years of smoke and sweat. The room smelt of vinegar and the lingering odour of cigarettes but Jarrett didn’t mind. He stood in front of the window, closing his eyes and took a deep breath of the city air. After filling his lungs with the thick summer air he opened his eyes and looked directly across the street into the apartment he had come to know too well; tonight he would find the answers to the questions he had asked only months earlier.

Jarrett had always been cursed with an insatiable desire for knowledge. It didn’t matter whether it was from books, radio, history, philosophy or sports; he craved the power that knowledge offered him. Because of this, as well as the circumstances in which he grew up in, he had devoted much of his life to benefit others in the hopes that they would share their own life experiences with him. His timid and caring nature drove him to the study of religions and philosophies at the local University but there was never enough for him to fully absorb in the classroom alone.

After a minute or so Jarrett stepped back from the window and picked up the light wooden chair that sat before his hotel room’s writing desk. He placed the chair squarely in front of the window in full view of the neighbouring apartment building and slowly removed his suit jacket. He folded it quietly and draped it over the back of the chair before taking a seat and beginning his watch.

This would be the third night in a row Jarrett had taken a vacant room at the hotel in order to observe the apartment across the street. Tonight, however, offered him the best chance thus far in witnessing what he had come to see. Other nights were met with distractions or a bad angle but in this new room he had full view of the apartment. As the heat crept in through the window Jarret loosened his tie, settling in for the long nights watch. After settling into the chair he glanced back at the bed behind him and stood up, walking over to his large tan suitcase. His fingers pressed softly against the locks and it sprung open revealing, amongst the clothes and toiletries; his Grandfather’s diary.

Quickly he picked it up and briskly walked back to his chair holding the diary close to his chest as if protecting it. Within its pages were the recanted tales of his Grandfather’s life as a fisherman and the strange and unexplained horrors he experienced throughout his years at sea.

His Grandfather died only a few months ago, and it was then that Jarrett found his diary and began reading it. Jarrett was overcome with excitement and horror at the thought of this unseen world beyond our own and while his Grandfather was a monster in his own right, he was no liar. He began cataloguing the pages of the diary in an attempt to understand what this meant and as he did he began to take notice of the world around him in the same way his Grandfather had. Articles of mysterious deaths sparked an interest in Jarrett that he never felt before and his insatiable drive for knowledge began taking the form of learning as much as he could about the occult and various unexplained cases around Arkham.

Though watching the police from afar worked for a short time, over the past few months Jarrett had gotten bolder, getting closer to the crime scenes and even keeping trinkets found on corpses. This all boiled over one night during his attempt to track a suspicious character. As he entered the dark alley he heard a soft moaning coming from behind a dumpster. Quickly he leaned around to find another victim of the man he had been chasing, however this one was still alive. Their eyes met Jarrett’s and quietly through the gurgling slit in their throat they begged for help. Jarrett sat frozen and took a shy step forward before stopping himself. He had never seen someone die. He took a short step back and crouched in the dark corner of the alley as the person lay their whimpering as their life slipped away. Jarrett simply sat there and watched them die – curious to see how the life would leave a person for the last time. This is what led him to this small hotel room for the past three nights.

As the hours rolled by and Jarrett’s eyes grew heavier, he drifted back to that night in the alley, ashamed of himself and what he had done.

In the early hours of the morning Jarrett woke abruptly, wiping the drool from his chin as he sat up embarrassed that he had nodded off. It was still dark outside and the lights in the apartment he was watching across the street remained off. Jarrett shook his head groggily from side to side, the street below him was now vacant and the city was fast asleep. After a beat he stood up, realizing that his chances for tonight were lost, and turned to face the door of his hotel room. He walked to the bed, grabbing his large suitcase and began heading for the door before he stopped himself realizing that he had forgotten his jacket. He set his suitcase down on the floor and walked back across the room to his former post from that night and picked up the neatly folded jacket. As he did, he glanced one final time at the apartment across the street; this time he saw something.

Jarrett quickly took his seat and stared intently into the black of the apartment; there was what looked to be movement in the darkness. After a moment a small area of the room lit up as a match was struck and for a second Jarrett saw the cold features of a man dressed in black lighting a cigarette. The red tip of the cigarette disappeared for a moment as the man presumably turned around and walked out the front door. In a flash Jarrett grabbed his things and bolted down the stairs, through the lobby, and out into the street with just enough time to see the man leave the building and enter his car. Jarrett ran to his own car and followed him.

This was two hours ago.