Bit of a long story guys, my apologies; but I’m freaking out and I have no idea what to do.

I often have to take out my parents dog, Arly, when they spend the weekend at the cottage and leave the dog at home. It’s not a big deal but truth is I’d rather not have to do it and for some reason the burden always falls upon me.

It wasn’t supposed to be anything other than a quick detour on my way home from work, but work went later than expected. Long story short our server went on the fritz and again it fell upon me to wait around for until the IT guy could get there. It wasn’t a big deal I just killed the next 3 hours on my iPhone playing games and lucky my battery died only shortly before he arrived, so I wasn’t sitting doing nothing very long. By the time he did arrive it was already dark out and I gave him the keys to lock up, I explained why and he understood; he’s a pretty chill guy.

My parents’ house isn’t particularity different or interesting, it’s a house of love and memories however a bit of an empty shell since we’ve all moved out. I knew Arly was going to either be nearly shitting himself or have already done it because I was (at this point) almost 5 hours later than what the dog is used to. So I opened the door to the front hall half expecting to be trampled by my parents black lab, but nothing; the door swung open to the pitch black front foyer, no dog in sight. Immediately my heart sank – the dog must have shit somewhere in the house. Fucking Arly.

This isn’t uncommon, so normally I just walk around the house until I smell shit and clean It up; regardless I’d put him out to run around in the dark a bit before I go home. Since his bed is normally upstairs I figured; alright sounds like a good place to start, so I dropped my bag and headed up stairs. The house was eerily quiet, more so because of the wind howling outside – I guess the contrast of the outside world to the stillness of the house accentuated it, but still it felt colder than usual. I entered my sisters old bedroom because 9/10 times when he’s done something wrong, he will hide and he always hides in one of 3 places, only 2 of which applied. I started turning on the lights because I really didn’t want to step in shit and I looked under my sisters bed: no Arly. Which meant he was under my parents bed…but just then I hear a smack downstairs which thanks my many years of living in this house meant that the back screen door just slammed closed.

The third place he always hides is out in our back yard under a large pile of stacked logs my dad cuts every summer. I ruled it out originally because he’s locked-up inside but now that might not be the case. I ran downstairs and sure enough the back door was open and there was a large tear in the back doors screen leading straight outside to the warm summer air. Now I’m pissed, how the fuck could he have gotten it open – unless my parents forgot to lock it…again. Arly is a clever if not annoying dog. So I walked the hundred or so feet to the back log pile yelling his name, “Arly!” I got down on my stomach once I got to the pile and stuck my hand into the hole he usually runs into. I could HEAR him breathing, wheezing like the old little shit he is. The hole is big enough for me to climb into but it’s muddy and by this time I was done fucking around with him.

FUCK. “Arly, get out. Get! Get!” yelping like many dog owners do, I can’t reach him without climbing in, but I can HEAR him breathing. Finally I realize I can’t get him back into the house without climbing into the hole, so I go headfirst into the hole. Three steps in I’m close enough to touch him and he turns his face to me, I can see the glint in his eyes and he must have been scared because they had never looked to animated before, not black like a dogs but almost human. I reach for him and the second I do he clambers out the other side. “Arly! Get inside!”

By the time I’m out again I hear the screen door smack shut again, I took a second to catch my breath and stand back up to start walking towards the house. I’m muttering curses under my breath now but the fucker is back inside so I go inside, shut and lock the back of the house and walk upstairs to his bed.

He’s not on it; but fuck it he’s inside, he went to the bathroom, I’ll come over tomorrow and fix the screen door, I’m done. I turn off the lights, save the one they keep on for him, gather my things and as I leave I hear him whimpering, a soft almost laugh-like whimper and all I think is, “Laugh it up you little shit, I’m sure you’ve had fun tonight.” I shut and locked the door behind me.

Okay but here is the fucked up thing; I’m home now, in bed and when I plugged in my dead phone it started charging. The second my phone came back to life I got a text from my mom; 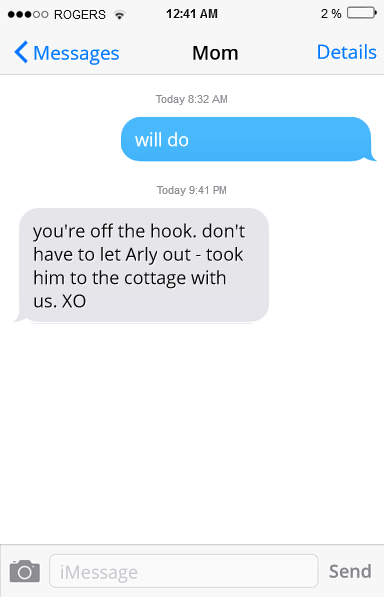